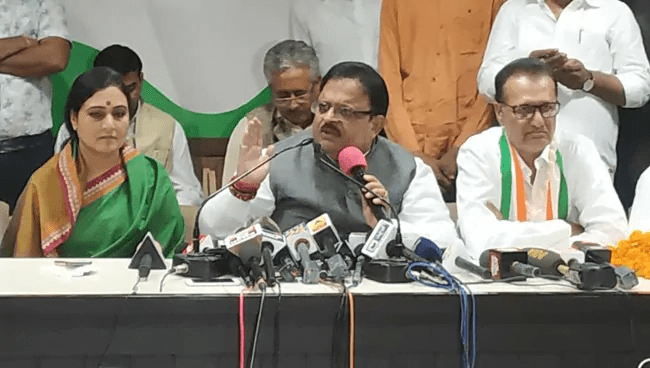 In a setback to Rajasthan ‘s ruling BJP ahead of the December 7 Assembly elections. The party’s Nagaur MLA Habibur Rahman yesterday returned to the Congress after a decade.

Mr Rahman was initially a member of the Congress and was a state minister between 2001 and 2003. And during the Ashok Gehlot-led Congress government. He joined the BJP in 2008 after he was denied a ticket by the Congress.

He won the 2008 and the 2013 Assembly elections as BJP candidate. But when the BJP denied him poll ticket this time and gave nomination to Mohan Ram Choudhary from Nagaur, Mr Rahman left the ruling party.

“I have returned home today. There is no condition for joining the party,” he said at a press conference.

On whether he will contest the Assembly elections, Mr Rahman rhetorically asked, “Who does not want to contest elections?”

However, Congress MP Raghu Sharma said the party will release its list of candidates for the Rajasthan polls only after the final approval of party president Rahul Gandhi.

Meanwhile, slamming Harish Chandra Meena for joining the Congress, BJP leader and Rajya Sabha MP Kirori Meena termed the former “an opportunist” .And claimed that this would not have any impact of the saffron party’s performance in the state election.

“There will be no impact. People know who is an opportunist and opportunists can go anywhere,” Kirori Meena said.

“Kirori Meena’s wife Golma Devi was a minister in the previous Congress government. He contested the 2013 assembly polls as the candidate of National People’s party and then joined the BJP. He became Rajya Sabha MP and now his wife was given ticket by BJP in its first list. He is the finest example of opportunist.”

A former IPS officer, who headed state police during the Ashok Gehlot government. Harish Chandra Meena had joined the BJP in March 2014 ahead of the Lok Sabha polls. And was pitted against his brother Namonarain who was then a Union minister in Rajasthan.

He had won the Dausa seat by defeating his nearest rival Kirori Lal Meena. Who was then a candidate of National People’s Party by a margin of 45,404 votes while Namonarain Meena had stood third.