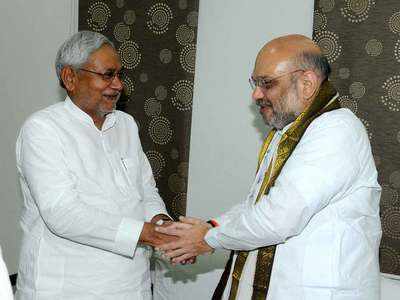 BJP 20 seats Bihar, Offers 12 Nitish 2019 Lok Sabha Elections, This arrangement, BJP wants to contest half of the state’s 40 seats, leaving the other 20 to its allies 12 for Nitish Kumar’s JDU, 6 for Ram Vilas Paswan’s LJP and two for Upendra Kushwaha’s RLSP. NDA leaders, however, denied finalisation of any formula for seat sharing and claimed that talks were on. Fighting as part of opposing camps in 2014, JDU had contested 38 seats and won two, while BJP had contested 30 and won 22.

As allies, JD(U) and BJP had contested 25 and 15 seats in 2009, and 26 and 14 seats in 2004. Nitish has clearly told BJP that they should first leave seats for the two smaller allies and then divide the remaining among the two bigger allies equally,” a JD U functionary said requesting anonymity. In June, JD(U) started asking for a larger share of seats with its leaders claiming that it was the “big brother” in Bihar and that Nitish should be the face of NDA in the state. BJP chief, Amit Shah, met Nitish in Patna on July 12. The chief minister had told reporters on July 16 that he expected BJP to come up with a seat-sharing proposal within “three to four weeks. The deadline was later revised to the second week of September.

Nitish was in Delhi on Wednesday. He attended a memorial for former Tamil Nadu chief minister M Karunanidhi in Chennai on Thursday. He is slated to return to Patna on Friday. Sources also said the allies, especially BJP and JD (U), may also agree to swap a few seats. Sitting MPs may be replaced with new faces in a few constituencies, including Patna Sahib, Darbhanga, Begusarai, Valmiki Nagar, Madhubani and Vaishali.

Analysts feel that the chances are high that Patna Sahib and Darbhanga would get new candidates as they are currently represented by “rebel” MPs Shatrughan Sinha and Kirti Azad.